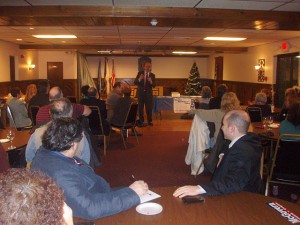 Jim McGovern addresses the GBV Dems and their guests

Earlier this evening, the Greater Blackstone Valley Dems got together to host Congressman Jim McGovern for a meet-n-greet in Sutton.  We had a great crowd, and we all got to hear the Congressman speak about the issues of the day, the climate in Washington, and the upcoming elections later this year.

Also in attendance were state senators Richard Moore and Michael Moore, as well as several candidates for state rep, including Don Bourque and Bob Dubois.  Jennifer  Callahan was there as well, but she was keeping her plans for the upcoming contests to herself at this point, saying that there’s still plenty of time to decide what she’s going to do this year.

It’s shaping up to be an exciting year – don’t miss out, join the Greater Blackstone Valley Dems and help us turn the valley blue!