As Lisa mentioned in her email, today was the last public hearing for the redistricting committee at the State House in Boston from 3-8 pm.  Given that I work in Dorchester just a block away from the JFK/UMass T-stop, I hopped the train after work and signed in at 4:30 pm. 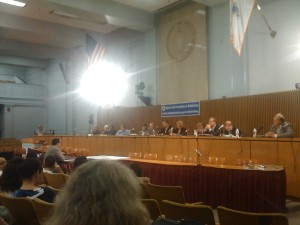 The committee hears testimony in Gardner Auditorium at the State House

After retrieving my keys, etc, from the security people at the door, I walked into a hallway and ran smack into Sean Riley, GBVD Member and Director of Constituent and Community Relations for Richard Moore, our State Senator!  Is Sean doing his job well, or what??!!??  😉

Sean was kind enough to escort me to the Gardner Auditorium, where the hearing was taking place.  I signed in and I was on my fame…

Many people testified about preserving districts – there was a strong presence of folks looking to keep District 9, Stephen Lynch’s district, intact. Others testified about the need to rework census calculations for incarcerated populations, arguing that people in prison should still be counted at their last residence rather than the address where they are currently serving their sentence.

When it was my turn to speak (at 7:30) I was mercifully brief.  I thanked the committee co-chairs and the members for their hard work and diligence in conducting open hearings throughout the state, and I introduced myself as a representative of the Greater Blackstone Valley Dems.  I described GBVD as a consortium of Democratic Party activists from the 14 towns of the Worcester/Norfolk Senate District, ably represented in the State Senate by Richard Moore.  I told them that GBVD would like to see three districts remain west of 495, primarily because we have the population to support such an arrangement, and because we have similar regional interests and intertwined regional economies.

The committee had no questions for me – they thanked me for my time and my patience in waiting to testify, and I was done.   Democracy!!